The Photo That Launched the Nike Empire 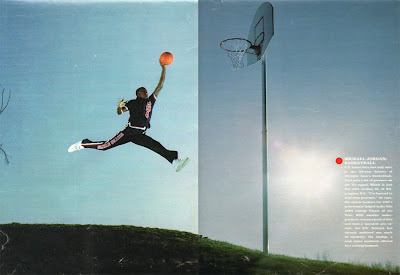 Ever wonder about Nike’s famous "Jumpman" logo – the symbol of the world-renown Air Jordan brand basketball shoes and other Jordan-brand apparel? Want to know the story of how the logo was designed and selected?

Take a look at this photo from the Pop Culture Fiend archives. It’s 25 years old and it’s had quite an impact on both the advertising world and the legacy of one of the world’s most successful companies.

Back in 1984, Life magazine, then its second incarnation, ran a cover story on the upcoming Summer Olympic Games in Los Angeles. Photographer Co Rentmeester shot a spread on American gold medal hopefuls that included hurdler Edwin Moses, boxer Mark Breland and University of North Carolina basketball star, Michael Jordan. Back then, Jordan was a college junior and was most famous for making the game-winning shot in the 1982 NCAA Championship game. At the time the photo was taken, Jordan was the College Player of the Year but no one really had any idea he would go on to become the greatest player in NBA history.

Around the time Rentmeester’s photo appeared in Life, Nike signed Jordan to a contract -- after he decided to forgo his senior season at UNC -- and the company got to work on a signature shoe. 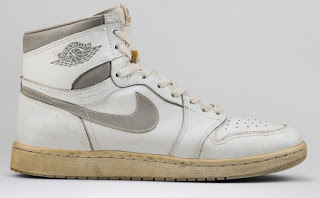 The first two generations of Air Jordans featured a  basketball and a pair of wings (I had some exactly like the one above) -- but when shoe designer Tinker Hatfield and the Nike team decided to completely redesign the shoe for the third generation, they looked into the past and to Rentmeester’s photo for inspiration. The photo was reproduced in a studio and thus was born the Jumpman logo. The Air Jordan III’s went on to become the best-selling Jordans yet, and after Michael wore them in his now epic 1988 NBA Slam Dunk Contest win, the shoes became must-haves. (I should know, I was working at Foot Locker at the time.) 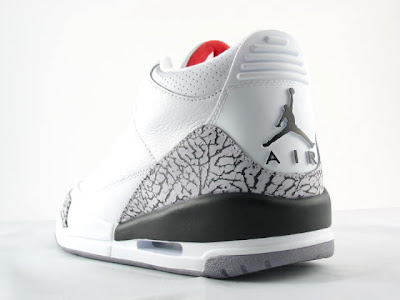 Largely due to the success of the Air Jordan brand (and this logo) Nike, which at the time was fiercely competing with Converse, Puma, and Adidas, would go on to become the most successful sportswear company in the world… and it’s all because of Rentmeester's picture. 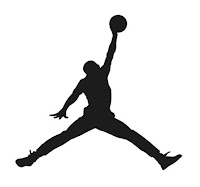