Came across an article on Rolling Stone's website titled "The Worst Songs of the 90s" and it triggered two thoughts:

First, the list is full of songs that were MONSTER hits, including "Achy Breaky Heart", "Ice Ice Baby" and "My Heart Will Go On". Regardless of how you feel about Billy Ray Cyrus, Vanilla Ice or Celine Dion, it's important to remember that these songs (and the others on the list) weren't popular for nothing people. Radio stations were playing them, people were buying them, and folks all over the country were jamming to them whenever they were played on the radio, at clubs or at parties -- WHICH WAS ALL THE TIME!

So I guess what this list tells us is that for a 10 year span twenty years ago, the majority of us were complete idiots.

Either that, or just maybe, when we look back at our musical (and other pop culture) choices, we sometimes turn into hyper-critical revisionists. (But that's a blog post for another time.)

The other thing this article tells me is that maybe 80s nostalgia is finally winding down and is being displaced by 90s nostalgia.

So with that in mind, let's jump on board with a list of: 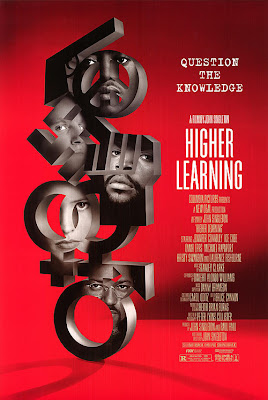 1995
Written and Directed by John Singleton


Director John Singleton’s follow-up to his fine but overly praised Boyz N The Hood is far more ambitious and more technically sound than his previous work, as the tensions created by racial conflict mount, and eventually wreak havoc on the campus of a large California university. Singleton’s interesting camera work, the broader scope of his story, and the performances he elicits from his ensemble cast (particularly within the storyline depicting how Michael Rappaport, as a freshman misfit, falls in with a band of local skinheads) are all evidence of his growth as a filmmaker. An extremely engaging and realistic examination of race relations among college students and the ingredients that can sometimes lead to conflict.

Killer Sequence: The disturbing climax where Rappaport goes on a killing spree at the school is (sadly) all too familiar these days.

Adam Sandler plays the title character, a golf phenom whose sensibilities and demeanor are more suited to the hockey rink than the PGA Tour. Reminiscent of Caddyshack (not only in subject matter but also theme and characterizations) this film has a broader appeal than Sandler’s quirkier, earlier effort, Billy Madison. A home video classic and the picture that kicked Sandler’s movie career into high gear.

Killer Sequence: Hard to top that fight scene with The Price is Right’s Bob Barker.

Twenty-five year old director F. Gary Gray (The Negotiator, The Italian Job) capitalized on the growing popularity of urban, inner city dramas (Boyz N The Hood, Menace to Society, Juice) by showing us a fun side of life in the hood. Ice Cube, as Craig, proves that he can do more than just scowl into the camera, but the breakout star here is Chris Tucker as Craig’s drug peddling friend Smokey, who expertly jives, whines and connives his way through a film that traces a lazy Friday afternoon in the lives of the two slackers. Tucker creates one of the funniest and most memorable film characters of the decade and Friday's success on home video led to two sequels.

Killer Sequence: Craig settles the score and shows what it really means to be a man in his final confrontation with the neighborhood bully Deebo. 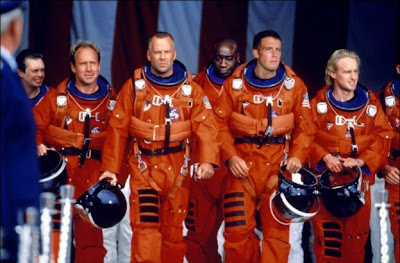 Director Michael Bay (of the Transformers movies) proved that he is master of the action genre with this sci-fi thrill-ride. It’s a familiar storyline: Gaggle of oil drilling miscreants fly into outer space, crash land on an asteroid that’s hurdling towards earth, and somehow manage to blow it up and save the world... (Okay, so the story’s not so familiar...)

This was the second of two runaway asteroid movies in less than a year (Deep Impact was the other) but producer Jerry Bruckheimer (Pirates of the Carribbean, Gone in Sixty Seconds, Top Gun) and star Bruce Willis know their way around an action movie like no one else. Throw in some killer special effects and a little comic relief courtesy of Steve Buscemi, and this movie scores big time as thrilling, edge of your seat, pass the popcorn entertainment.

Killer Sequence: The opening CGI scenes of midtown Manhattan being decimated by a meteor storm.

Steven Spielberg has perhaps enjoyed more success than any other filmmaker in history. In the 90s, his films grossed over $1.2 billion at US box offices. Though many of his pictures have also been critically acclaimed (Jaws, Saving Private Ryan, The Color Purple, Empire of the Sun), Schindler's List is still considered Spielberg's masterpiece. Disturbing, heartrending and uplifting all at once, the film tells the then little-known story of Czech business magnate Oscar Schindler, and how the morally bankrupt war profiteer finds his heart and saves his soul by orchestrating the escape of hundreds of his Jewish workers from the clutches of Third Reich. It’s impossible not to be moved by this film or the performance of a commanding Liam Neeson in the title role. Filmed mostly in black and white, the movie has an almost documentary type feel, particularly during those scenes depicting the atrocities committed by the Nazis. This film solidified Spielberg as not only the world’s most popular and successful directors, but also one of its’ most important and enduring.

Killer Sequence: The once callous Schindler breaks down in front of his workers, openly and inconsolably weeping as he tells them, “I didn't do enough.”

- The Evolution of the 80s Teen Movie: How Bob Clark, Gen
X, and Home Video Changed the Landscape of American Cinema
- Welcome to Pop Culture Fiend
- Things That Bug Me About Teen Wolf
- 10 Reasons We Love Al Bundy
- The Photo That Launched the Nike Empire
- 10 Songs That Defined The 80s
- Airline Magazines, Godfather III, and Madonna -- What's the Connection?
- Before Family Guy, Before South Park, Before The Simpsons...
- Who Was the Greatest Athlete of the 80s?