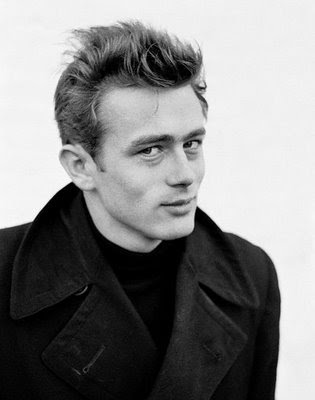 Fifty four years ago today... Wait, that makes no sense. Those two things are mutually exclusive. If it was "54 years" ago, then it can't be "today"...

On September 30, fifty four years ago, James Dean died in car accident. Dean was many things: a gifted artist and pioneering "method" actor, the country's first "young" movie star, idol to a generation of America's youth, the personification of teen angst and rebellion, enduring hero of the 1950s...

Above all else though, Dean was a multifaceted, multi-talented, complex personality who could have become many things. It was only through a specific combination of talent and ability, desire and focus, and hard work and happenstance that he became a timeless icon and one of the most famous figures in American pop culture.

Much has been written about him but here are ten things most don't know about James Dean:

My town likes industrial impotence
My town's small, loves its diffidence
My town thrives on dangerous bigotry
My town's big in the sense of idolatry
My town believes in God and his crew
My town hates the Catholic and Jew
My town's innocent, selfistic caper 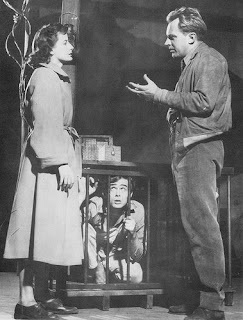 My town's diligent, reads the newspaper
My town's sweet, I was born bare
My town is not what I am, I am here

Finally, here's a 20/20 news story from many years ago that does a nice job of recounting Dean's life and legacy. 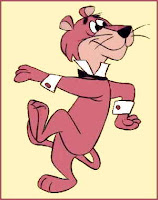 Over the last several years, pop culture has been enamored with cougars. And no, we're not talking about Snaggle-Puss, the anthropomorphic, well-dressed but slightly effeminate mountain lion that's always exiting stage left. We're talking about sexy older women in pursuit of younger men. To my point, there's tons of blogs and websites (of varying ilks) dedicated to 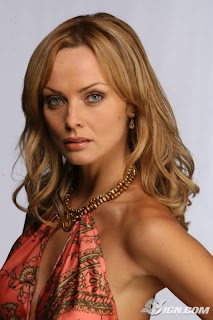 the appreciation of cougars, and we've also seen several cougar-related characters and storylines in recent TV shows and movies. Among our favorites: Izabella Scorupco as Paige in the straight to DVD movie Cougar Club; Famke Jansen as Ava, who seduces Sean's son on Nip Tuck; Susan Blakely as self-help expert Angie, who sexes up Charlie Sheen on Two and Half Men; and of course Susan Lucci as Erica Kane, who has an affair with her daughter's ex-husband on All My Children.

Reality TV has also embraced the cougar. There was the Bachelor-knock off Age of Love, featuring a group of cougars competing for the affections of a younger man, and The Cougar, with a group of younger men vying for a 40 year old woman. 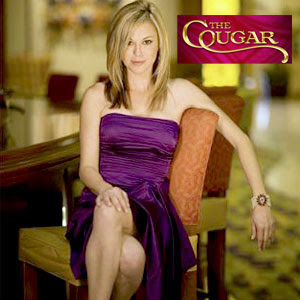 And ABC is just about to premiere its new fall series, Cougar Town, starring Courteney Cox as a fortysomething divorcee trying to get back in the dating scene. By the way, it wasn't always "Courteney" (with an extra "e") was it? Didn't it used to be just plain old "Courtney"? We'll have to go back and watch the opening of Friends. Don't you love how these celebrities just decide mid-stream in their careers to correct the spelling or pronunciation of their names? Remember when Demi Moore was "DEM-ee"? Now it's pronounced "De-MEE". Or Terrell Owens. It was "Ter-REL", now it's "TER-el". WTF, just tell us this stuff from the start people... 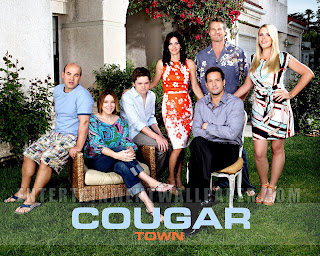 Where were we?... Oh yeah, cougars... To wrap things up, here's our favorite cougar-related TV commercial. Cougars and Tacos?... Sounds good to us... (Click here for a link to the commercial. If it doesn't play automatically, it should download and you can open with your browser.)

Commercials We Love - "You Will"

This 1993 commercial (narrated by Tom Selleck) always seemed kind of vague, even cryptic, to me. Now of course, it all makes perfect sense and it's obvious that a lot of what AT&T was referring to was the development of its wireless cellular network infrastructure and the technologies that were greatly advanced as a result. Unfortunately, by the time all of these technologies were finally realized and became available to the everyman for everyday use, this commercial and the others in the series were long forgotten.

What AT&T needs to do is a followup. Something like this:

"Hey, remember all that cool shit that guy from Magnum P.I. told you about back in the nineties? Well you can do all that stuff now... Oh and by the way, guess who made that possible?... That's right, US... AT&T!... IN YOUR FACE VERIZON!... So all you ungrateful little bastards need to quit bitching about dropped calls and get down on your knees and start kissing our blue and white asses!" 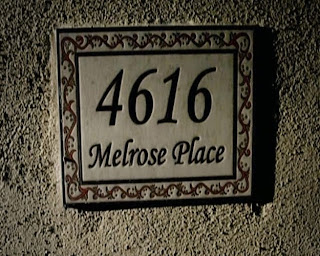 After bringing back Beverly Hills 90210 last season (as just plain ole 90210) wasn't it just a matter of time before the CW took the next logical step and ressurrected Melrose Place? The original Melrose was a spin-off that ultimately became one of the most popular shows on television and even reached the level of “water cooler” show, right alongside its contemporaries Friends and Seinfeld.

So far, it looks like the new Melrose is getting mixed reviews. I watched it Tuesday and I have to say, it held my attention… but barely. Maybe we're being too crtical, too soon, but most of the characters, including Violet (Ashley Simpson), Riley (Jessica Lucas) and Auggie (Colin Egglesfield) aren’t terribly interesting and so far the show’s writers haven’t hinted at very many compelling storylines (with the exception of “who killed Sydney and why” -- but I’ll get to that in a minute.) 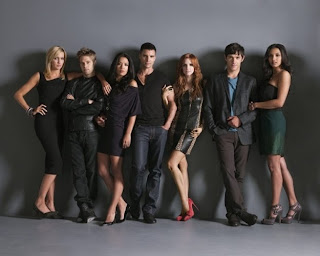 All in all, the premiere episode was very reminiscent of the original Melrose’s entire first season. If you recall, that season the plots and almost all the characters (particularly Courtney Thorne Smith as Allison and Andrew Shue as Billy) were downright boring. The show only took off after the characters of Sandy (Amy Locane) and Rhonda (Vanessa Williams) were jettisoned; Heather Locklear was brought in to play ad exec Amanda Woodward; and Thomas Calabro’s character (Michael) turned evil.

You’d think the new Melrose Place producers would’ve learned a lesson from this but it seems like they missed a golden opportunity to perhaps launch the new series with Locklear in a multi-episode arc (maybe as the owner of the apartment complex?) Perhaps Heather wasn’t available, or maybe she wanted too much money because instead, what we got was Laura Leighton returning as Sydney, who is now the apartment manager. 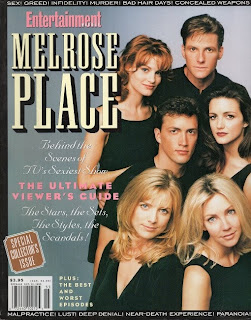 Seems like the producers had the right idea. Last season, bringing back cast members Jennie Garth and Shannen Doherty from the original show attracted extra viewers to 90210 and helped expand its audience demographic beyond those in their late teens/early twenties.
Similarly, the Melrose producers had Leighton and Calabro reprise their roles from the original Melrose... But then they blew it by killing off Sydney and barely giving Michael any screen time at all. 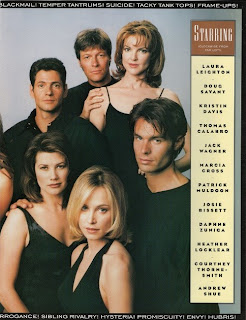 In fairness, it’s not all bad. We do like Stephanie Jacobsen as Lauren, med student by day, prostitute by night, and also Katie Cassidy as upwardly mobile Ella. But what this show really needs is a jump-start—something to pull in viewers of the original series, because let’s face it, there’s a ton of competing programming for that teen and twentysomething audience it's targeting. What made the original Melrose so entertaining was when the storylines came off the rails (remember the cliffhanger where crazy-ass Kimberly blew up the courtyard?) and when Michael, Sydney, and Amanda were wreaking havoc on a weekly basis. But it seems like this new incarnation of Melrose has too many "Allisons" and "Billys" and not enough "Kimberlys" and "Michaels" (although we can see Ella becoming a scheming Amanda-esque type character.)

Original Melroser Josie Bissett will be back for at least one episode as Michael's ex-wife, and Daphne Zuniga returns as Jo at the end of the season. That's fine, but did anyone ever really care about them the first time around?
Come on -- get with it you guys! Inject some life into the show! Pick up the phone, make a deal with Heather Locklear and bring back Amanda as a regular. Then punch up Michael's role and commence with the over the top, crazy plot twists! Let's go! We wanna see stolen babies, catfights in the pool, dead bodies rising from the grave, and brides run over by speeding cars on their wedding day!
1 comment: 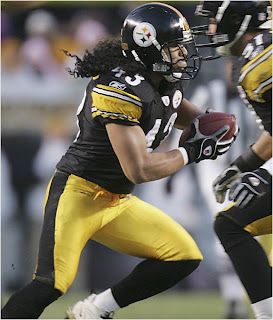 Troy Polamalu, star defensive back for the Pittsburgh Steelers, strained his MCL last night against the Tennessee Titans and is out 3 to 6 weeks. Steelers head coach Mike Tomlin admitted that the injury could even be something worse than a strain and Polamalu will undergo an MRI today.

Polamalu is now the latest in a VERY long list of players who've suffered major injuries or other career derailments the same year (or shortly after) they appeared on the cover of EA Sports Madden Football game. Consider:
2008 Brett Favre (New York Jets)
The Jets started 8-3, but then Favre tore the biceps tendon in his throwing arm. He threw 6 fewer touchdowns and 7 more interceptions than in 2007 and the Jets finished 9-7 and missed the playoffs.
2007 Vince Young (Tennessee Titans)
Young finished with an abysmal nine touchdowns and 17 interceptions. The next season, amid personal problems, he lost his starting job to Kerry Collins and has yet to regain it.
2006 Shaun Alexander (Seattle Seahawks)
Alexander missed six games with a broken foot. His 896 yards and 7 touchdowns were his lowest since his rookie season. 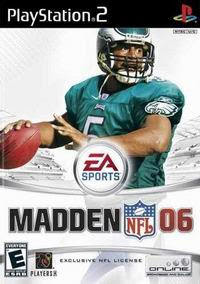 2005 Donovan McNabb (Philadelphia Eagles)
McNabb suffered a sports hernia and missed the second half of the season. The Eagles finished 6-10 and missed the playoffs for the first time since 1999.
2004 Ray Lewis (Baltimore Ravens)
Lewis had a fine year and his numbers were only slightly down from the year before. However, he did miss one game due to injury and, for the first time in his career, did not record an interception.
2003 Michael Vick (Atlanta Falcons)
Literally days after Madden was released, Vick broke his leg in a preseason game and missed 11 games. Oh, and a few years later I think there was this thing with some dogs or something?...
2002 Marshall Faulk 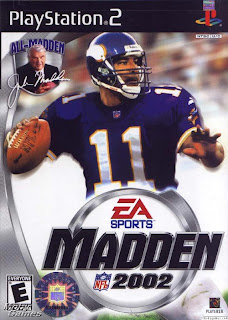 (St. Louis Rams)
Faulk rushed for 430 fewer yards and had 4 fewer touchdowns than 2001. It was Faulk's worst season since 1996.
2001 Daunte Culpepper (Minnesota Vikings)
Culpepper missed four games with an injury and threw for 1300 fewer yards and 19 fewer touchdowns than he did in 2000.
2000 Eddie George (Tennessee Titans)
George played great in 2000 (1509 Yds, 14 TDs) but the following year he failed to break 1000 yards. Tennessee missed the playoffs and George was never again a premier back.
1999 Barry Sanders (Detroit Lions)
Prior to the season, Sanders asked Detroit to trade him. When they refused, he abruptly retired.
1998 Garrison Hearst (San Francisco 49ers)
Hearst had a fantastic regular season but broke his ankle in the playoffs. Complications occured and Hearst missed most of the next two seasons. 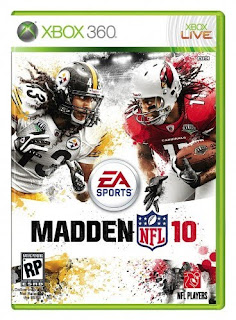 So it seems there's definitely something to the alleged curse. Truth be told, it's actually one of the reasons I shied away from Larry Fitzgerald (who appears on this year's cover along with Polamalu) in my fantasy football draft.
Clock's ticking Larry...
No comments: