Be sure to check out Part 1

Excellent ensemble piece based in part on the true story of the crew of the "Memphis Belle", the first bomber in the 8th Air Corps to successfully complete 25 missions during WWII.

A vicariously thrilling tale of courage and comaraderie punctuated by some fine performances by some charismatic young actors, including Billy Zane, D.B. Sweeney, Eric Stoltz, Harry Connick, Jr. Matthew Modine as staid pilot Dennis Dearborn, and Tate Donovan as his glory hungry co-pilot Luke. The film so accurately captures the look of the period and the story is so engaging, you'll be on the edge of your seat for over an hour hoping the young crew can defy the odds and make it from their base in England to their German target and back.

Killer Sequence: Ironically, the film’s most powerful moment occurs not in the air with the young heroes, but back on the ground when John Lithgow, as an army Colonel working on publicizing the success of the Belle crew, reads through a collection of letters from the loved ones of soldiers killed in battle. 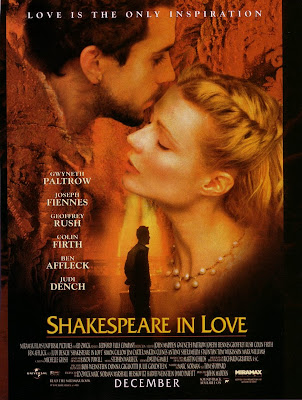 A very clever premise sets this film in motion as it provides a fictional account of a young William Shakespeare in the process of penning Romeo and Juliet (or as it was originally titled, Romeo and Ethel the Pirate’s Daughter.) With Joseph Fiennes (Ralph’s little brother) as the young bard and Paltrow (who won an Academy Award for her flawless performance as his treasured Viola) the
film expertly plays connect the dots and “What if it happened this way?” with the circumstances
surrounding the original production of what is arguably Shakespeare's most well-known play.

Paltrow’s character is slightly reminiscent of Julie Andrews’ in Victor/Victoria in its’ “woman dressed as a man playing a woman” theme but otherwise, Norman and Stoppard’s Oscar winning screenplay is uniquely original and sprinkled with clever literary references and in-jokes that add a rich subtext to the film. Some very funny supporting performances from Rush, Wilkinson, Firth, and a scene stealing Judi Dench as Queen Elizabeth I make the film even more of a must-see.

Killer Sequence: The film's climax sees Viola sail for Virginia with her husband. But as Shakespeare begins to write Twelfth Night, he imagines her shipwrecked and their love enduring for all time. 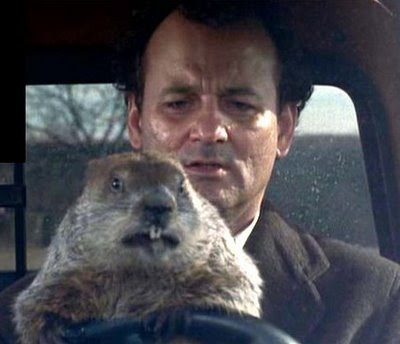 Refreshingly inventive comedy from one of the funniest and most
underrated filmmakers working in the comedy genre, Harold Ramis (Caddyshack, Analyze This, National Lampoon’s Vacation). Murray plays Phil Connors, a cynical and condescendingly obnoxious weatherman forced to relive the same day over and over until he gets it right. In a series of hilarious sequences, Phil at first fears, then exploits, laments and finally makes the most of his situation. One of the most original comedies in years, featuring a subtly brilliant comedic performance by the always superb Murray.

Scottish hero William Wallace is profiled in this sweeping Mel Gibson epic. In only his second directorial effort, Gibson manages to delicately balance the frenzied chaos of the riveting battle scenes with more quietly dramatic moments like those featuring Patrick McGoohan and Sophie Marceau as King Edward the Longshanks and Princess Isabelle, respectively. McGoohan delivers an Oscar-caliber performance as does Gibson, who wound up with two of the golden statues (Best Director and Best Picture.) Brilliantly photographed by John Toll (Legends of the Fall, Almost Famous) this film rivals David Lean’s Lawrence of Arabia as the best of it’s genre -- the historical action/drama.

Killer Sequence: Any of the seemingly logistically impossible battle scenes, particularly the one after Wallace appears in blue warpaint and delivers an inspiring speech to his troops. 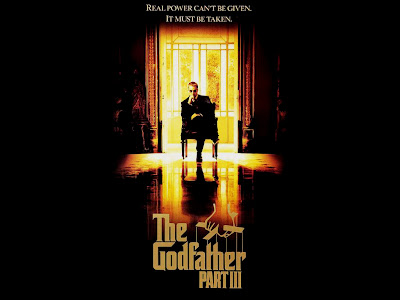 Much (unjustly) maligned third installment in the Coppola trilogy based on Mario Puzo’s best seller about the rise of an Italian crime family. Coppola was justifiably criticized for casting his inexperienced daughter Sofia in the pivotal role of Mary Corleone (a part that was to be portrayed by Winona Ryder until she dropped out of the project.) But Sofia’s amateurish performance aside, Godfather III is a superior film that would be much more highly regarded if it weren’t for the fact that its’ two prequels are considered two of the best movies in cinema history.

In a film that was nominated for Best Picture (G3 haters always seem to forget that) Coppola tells the tale of a now repentant Michael Corleone and his attempts to extricate himself and his family from the mafia ties created by he and his father. Coppola cleverly weaves his story around actual historical events, placing Michael at the center of the rise of the Atlantic City casinos and the political/corporate upheaval of the Vatican during the early 1980s. Andy Garcia is charismatic as Michael’s loyal but ambitious nephew, Vincent, who wants to follow in his uncle’s footsteps, and there are fine supporting performances by Joe Mantegna as Michael’s slimy nemesis Joey Zaza, and the overlooked Richard Bright as Al Neri.

Despite production problems that severely impacted his ability to deliver a worthy sequel (Robert Duvall’s character, Tom Hagen, had to be killed off and Diane Keaton’s role as Kay was severely reduced -- reportedly because the pair each wanted more money) Coppola succeeded in making a film that stands on its own but is also true to its predecessors in both theme, characterization and visual style. A totally engrossing movie and one that provides closure on the story of the Corleones, the mafia family to which all others (both real and fictional) are now compared.

Killer Sequence: Every Coppola film has at least half a dozen, but nothing was more gut wrenching than witnessing Mary’s assassination (and Michael’s anguish) on the steps of the opera house.